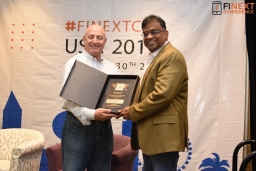 Ravi Suria was awarded the Excellence in Finance — Leaders award for their significant contribution towards the financial sector at FiNext Conference 2019, held at the Hyatt Regency Grand Cypress, Orlando, Florida.

For over two decades, Ravi Suria has enjoyed a stellar career and made significant contributions in the investment management industry, in both public market hedge funds and private venture funds. Mr. Suria is the founder and Managing Partner of Valmiki Capital Management, an NYC/New Orleans based firm with investments in public equities, real estate, and early-stage growth companies. Since launching the venture investing business in 2012, Valmiki has invested in over 40 startups, of which it has seeded and incubated more than two dozen.

His recognition as a leader in Excellence in Finance, comes from his contributions as a seed investor and founder in fintech startups, where his fund’s investment philosophy is driven by the impact of technologies like visualization, immersive learning, distributed ledger, and edge computing on end customer experience, privacy, and transparency. He was the first seed investor in ALPHABETA, the leading startup in democratizing the world of financial education, investment advisory and data analytics through visualization and gaming-influenced active learning.

Mr. Suria is also founder and CEO for Visible Wealth Management, a technologically driven wealth management firm startup aimed at disrupting the status quo in the current financial advisory market. The future of financial advice will be driven by the democratization of knowledge, empowerment of the client and transparency of data and analysis, themes which formed the core of Mr. Suria’s talk at the FiNEXT conference. His demonstration of the Visible Wealth platform powered by the ALPHABETA technology gave the audience an early look at a truly next-generation financial advisory platform.

Prior to founding Valmiki, Mr. Suria was a portfolio manager at Moore Capital where he managed a $2 billion global equities portfolio spanning over three dozen countries and almost every industry sector. Previously, he served as a Managing Director at Duquesne Capital where he was responsible for starting the emerging markets investments program in 2003.

Mr. Suria began his career in sell-side research at PaineWebber and was a top ranked analyst at Lehman Brothers until he joined Duquesne. During his time as an analyst, he received numerous industry accolades, including the Institutional Investor All Star Analyst, Fortune Magazine’s People to Watch and All-Star Analyst. Additionally, he was named one of the 100 Most Influential People in Technology by Crain’s and 100 Most Influential People in Finance by Treasury and Risk Magazine.

In his philanthropic endeavors, he was a founding Trustee for the Bronx Prep Charter School and a Trustee for the Bronx Defenders, both in New York City. In India, he also serves as an advisor to Agastya, the largest Hands-On Learning Program in the world. For the past decade, he has taught asset management at the AB Freeman School of Business at Tulane University where he is adjunct faculty.