Will the 2020 US presidential elections outcome significantly affect the Indian stock market? 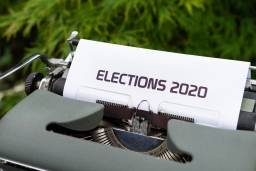 Most of the world is waiting with bated breath the results of the most anticipated political event of 2020 – the US Presidential Elections! And this time it all unfolds in the backdrop of a raging global pandemic that shows no signs of ebbing.

In terms of volatility, the S&P 500 index has typically shown a higher fluctuation in election years, as compared to non-election years1. This is mainly due to the market frequently repricing the potential impact of the new administration’s policies. In the current scenario, how the pandemic plays out, especially through the fall and winter, might make the US benchmark index even more volatile. And this uncertainty is likely to spread to other major markets. In terms of returns, the BSE Sensex dropped a cool 1,600 points in the immediate aftermath of the 2016 US elections. However, the index has shown a CAGR of ~11% from 2017 till date3.

Let’s get some more stats. The BSE Sensex had a CAGR of 11% and 21% during the two terms when Barack Obama was the President of the United States. The only other time this was beaten, was during the 1989-1993 presidency of George W Bush Sr. Most other times over the last 30 odd years, the CAGR has been 5% - 10%.

This gives us some confidence that unless there is a complete breakdown of social and economic policies, hope remains that the markets, even if volatile in the short term, will show a decent return over the longer duration (again, hopefully, irrespective of the winner!)

One week after the date of the presidential election, the change in BSE Sensex and the S&P500 index show a very high positive correlation of 0.97!2 This reduces to a mere 0.56 in the month following the election date. This means that the inherent structural trends in the Indian stock market will eventually take over in the longer term.

Once the election result is out, passing of the $2 trillion stimulus bill will have a very positive effect on the US economy, and will boost investor confidence all across the globe. The same sentiment holds true for more favourable trade policies, especially from an Indian point of view.

It is also expected, that regardless of the winner, the US Federal Reserve will not make any significant interest rate changes in the near future, after the three cuts it declared last year. The effect of continued low rates can be seen currently as well, as the Indian government has issued new bonds to finance its increased spending. FIIs have been major investors both in the bond market and the equities market ($1.6 billion FII inflow in Aug 2020, the highest monthly in 10 years)4

Another strategic point to note, is the impact of the next President on the US relations with China. If China decides to take any advantage should there be confusion and uncertainty, the Indian government might find a challenge in keeping China’s aggression at bay, resulting in a potential negative effect on the stock market.

What we think would be prudent at this time would be to watch and track carefully, and not make any big bets. One or two strategic factors are enough to change the direction of the stock market and one has to first concentrate on protecting one’s portfolio, rather than focus on big returns in the current scenario. Speculations should give way to hedging, especially if there are any US investments in the portfolio.

Most important, lets hope that the result is decisive and graciously accepted by all so that it is not stuck in legal battles for a prolonged period of time. That uncertainty, will surely be negative for markets the world over!